A draft of an essay-in-progress about heroic beauty

§0. I am putting together here a draft of some thoughts I have had lately about heroic beauty as expressed in the visual arts of ancient Greek material culture. My aim is to turn these thoughts, informal as they are for now, into a formal essay that I am preparing at the request of two dear colleagues who are organizing an art exhibit titled “Heroic Kállos.” I am attracted to their use of the ancient Greek noun kállos = κάλλος, meaning ‘beauty’, but my thoughts now turn to a Modern Greek adjective as well, oréo– = ὡραῖο-, meaning ‘beautiful’. I propose here to reconstruct an earlier meaning of this word in ancient Greek, and I will connect that meaning with the very idea of heroic beauty, male or female. Further, I will argue that the goddess Hera, endowed with her own  personal beauty, was a model for picturing this idea.

§1. As I pointed out in The Ancient Greek Hero in 24 Hours (Nagy 2013, hereafter abbreviated as H24H), Modern Greek oréo– = ὡραῖο-, meaning ‘beautiful’, is derived from ancient Greek hōraîo– = ὡραῖο-, meaning ‘seasonal’ in earlier texts but also meaning, in later texts, ‘beautiful’—which eventually becomes the sole meaning, as in Modern Greek (H24H Hour 14). Given such an eventuality, where the ancient idea of seasonality evolves into the modern idea of beauty, I ask myself: how to explain such an evolution in meaning? An answer, I think, can be found by considering the ancient Greek noun from which the adjective hṓraîo– = ὡραῖο-, meaning ‘seasonal’, is derived: the noun is hṓrā = ὥρα, meaning ‘season, seasonality’. This form hṓrā = ὥρα is etymologically related, I argue (H24H Hour 1), to the form Hḗrā = ῞Ηρα, which is the name of the goddess of seasonality, Hera. Whereas seasonality is a variable, as when we say that different fruits or vegetables are “in season” at different times of the year, Hera as the personification of seasonality is a cosmic absolute. Likewise absolute are the three attendants of the goddess Hera, who are the Hôrai or Seasons, goddesses in their own right. Each one of these three secondary goddesses is a personification of hṓrā = ὥρα. Hera is attended by the personified Hôrai or Seasons in her role as controlling the natural hôrai or seasons. So, if natural seasonality is beautiful, then the cosmic seasonality of Hera and the Hôrai must be absolutely beautiful.

§2. But what about heroic beauty? Is it absolutely beautiful as well? My answer is yes, in the sense that the beauty of the hero is connected to the absolute beauty of seasonality as controlled by Hera. After all, the very idea of heroes, male or female, is formally connected to the idea of seasonality, as conveyed by the noun hṓrā = ὥρα and by the name of Hera, Hḗrā = ῞Ηρα. The formal connection, as I argue (H24H Hour 1), is this: the forms hṓrā = ὥρα and Hḗrā = ῞Ηρα are etymologically related to —or, to say it more succinctly, cognate with—the form hḗrōs = ἥρως, which means ‘hero’.

§3. To illustrate the connectivity of heroes with the beauty of seasonality, as expressed by the noun hṓrā = ὥρα, I quote here the wording of a would-be initiand in the Hērōikos of Philostratus, a text dating from the early third century CE. The initiand is speaking to his would-be initiator, who tends the beautiful natural setting of a cult hero named Protesilaos:

How diverse [poikilē] is the beauty [hōrā] of this place you have here, and how lush have the clusters of grapes grown! How well-arranged are all the trees, and how ambrosial [ambrosiā] is the fragrance of the place!

I have written a commentary (H24H 15§43) on the context of this passage, and I will now epitomize those aspects of my comments that are relevant here. I start with details about the overall setting. A gentle breeze is carrying the sweet aroma of flowers in bloom, and the initiand is feeling refreshed. He remarks that the plant-life literally ‘breathes out’, ana-pneî, a sweetness of its own (Hērōikos 3.3). It is the right season, the exact time, the perfect moment: it is the hōrā (3.5; also earlier at 3.2). The initiand can begin to sense the hero’s sacred presence. Through a kind of sacred metonymy (H24H 14§16), the breath of the hero himself now begins to animate the atmosphere: Protesilaos is now revealing, apo-phainōn, the scent of the blossoms at their sweetest (11.3).The hero’s presence smells sweeter than myrtles in autumn (10.2). The perfect moment or hōrā, in all its natural beauty, becomes the ultimate epiphany of the cult hero.

§4. The concept of hōrā as the ‘right season’ (Philostratus Hērōikos 3.2, 3.5) conveys the context of ritual perfection and correctness; in that sense, hōrā is conceived as the perfect moment of beauty (H24H 15§44). It is relevant to recall here the Modern Greek adjective oréo-, which as we saw means ‘beautiful’ and which corresponds to ancient Greek hōraîos, ‘seasonal’, And the meaning of hōraîo-, as we also saw, is ultimately derived from hōrā.

§5. This inherited link in meaning between the beauty and the seasonality of hōrā is captured in a poem of Giorgos Seferis, where the sensuous experience of marveling at natural beauty is expressed by way of the Modern Greek adverb oréa, corresponding to the neuter plural of the ancient Greek adjective, hōraîa (ὡραῖα):

§7. Having recalled the relevance of the Modern Greek adjective oréo-, which means ‘beautiful’ and which corresponds to ancient Greek hōraîo-, ‘seasonal’, I find it also relevant to recall here once again the formal and semantic connections of hōrā and Hērā with hērōs, ‘hero’.

§8. I should add that heroes become ‘seasonal’ only after they die and achieve mystical immortalization. That is why the death of a hero is a beautiful death, une belle mort, and that is also why the hero in death can be seen as a beautiful corpse, un beau mort (H24H 5§108). And even the unseasonality of the hero in life can be seen as beautiful, because it will lead to the seasonality of life after death. That is the beauty and the sorrow of an epithet we find toward the end of the Iliad (24.540), where Achilles while he is still alive in his own epic narrative is described as pan-a-hōrios, ‘the most unseasonal of them all’. 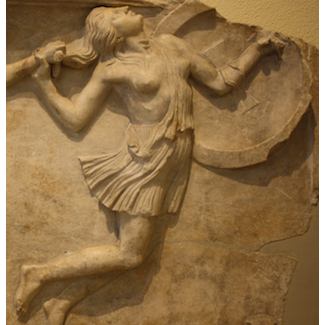 Amazonomachy: close up of an Athenian pursuing an Amazon. 2nd c. CE. Image via. Image used in Classical Inquiries 2018.01.12.

§10. And I close by showing a picture reconstructing a colossal statue of Hera as described by the traveler Pausanias (2.17.4–7), who lived in the second century CE. He saw the statue when he visited the temple of “Argive” Hera during his travels in the territory of Argos. 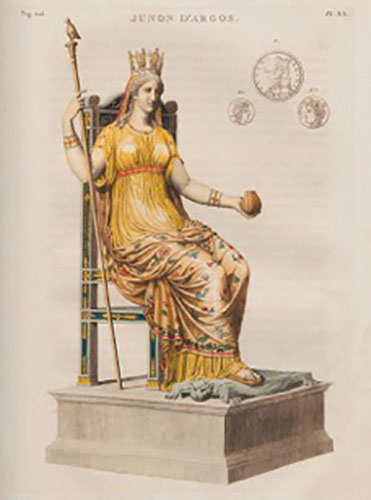