gnagy
December 21, 2017
|
By Gregory Nagy, Pausanias commentary, Pausanias reader
2017.12.21 | By Gregory Nagy I continue from where I left off in Classical Inquiries 2017.12.14. Here on the cover page, I focus on what Pausanias will be reporting at 1.11.1, where we read that a Greek king named Pyrrhos-son-of-Aiakidēs claimed as his ancestor, counting twenty generations backward in time, the Greek hero Pyrrhos-son-of-Achilles. I marvel at what seems to me such an intriguingly short span of time separating the king in history from the hero in epic. Here on the cover, I show a close-up from a vase painting by an artist named Douris, dated at around 490 BCE, which pictures a moment when Pyrrhos the hero reaches out to receive the helmet of his dead father, Achilles. We see the profile of the young hero as he contemplates the helmet that he holds delicately in his hand. But the profile of the helmet that is facing him seems to have a face of its own—a dead face that is staring back at Pyrrhos, returning the young man’s gaze. The dead face is radiating its vision of death. I am reminded of the traditional pose in Shakespeare’s Hamlet, Act 5, Scene 1, where the young prince returns with his gaze the blank stare of death emanating from the skull that is facing him as he holds it in his hand. 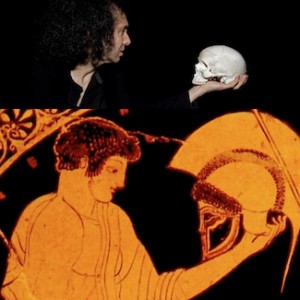 I continue from where I left off in Classical Inquiries 2017.12.14. From 1.11.1 to 1.13.8, there is a lengthy narrative about Pyrrhos-son-of-Aiakidēs (the latinized spelling of his name is Pyrrhus), king of Epeiros, whose lifespan dates from 319/8 to 272 BCE. This Pyrrhos was world-famous for his many military successes, including victories in his war against Rome after he invaded Italy in 280 BCE—though the heavy losses suffered by his forces in their encounters with the Romans, as narrated for example in Plutarch Life of Pyrrhos 21.9, led to a proverbial expression that is still current today, “Pyrrhic victory.” Before he narrates the story of Pyrrhos, however, Pausanias presents other historical narratives that extend from 1.8.2 all the way to 1.11.1. {1.11.1} translation by Jones 1918, modified by GN 2017.12.21:

Such were the things that happened in connection with Lysimakhos. The Athenians have also a likeness [eikōn] of Pyrrhos. This Pyrrhos was not related to Alexander, except by way of genealogy [genos]. Pyrrhos was son of Aiakidēs, son of Arybbas, but Alexander was son of Olympias, daughter of Neoptolemos, and the father of Neoptolemos and Arybbas was Alketas, son of Tharypos. And from Tharypos to Pyrrhos, son of Achilles, are fifteen generations [geneai]. Now, Pyrrhos was the first who after the capture of Troy disdained to return to Thessaly, but sailing to Epeiros dwelled there following the oracular-pronouncements [khrēsmoi] of Helenos. By Hermione Pyrrhos had no child, but by Andromache he had Molossos, Pielos, and Pergamos, who was the youngest. Helenos also had a son, Kestrinos, being married to Andromache after the killing of Pyrrhos at Delphi.

{1.11.1} subject heading(s): Pyrrhos the hero, Pyrrhos the king Pausanias at 1.11.1 begins here his narrative about Pyrrhos-son-of-Aiakidēs, king of Epeiros. I have already noted that Pyrrhos claimed as his ancestor, counting twenty generations backward in time, the Greek hero Pyrrhos-son-of-Achilles. (Pausanias complicates the numbering by starting with an ancestor that goes five generations back and then adding fifteen generations more.) This hero was otherwise known as Neoptolemos, meaning ‘renewer of war’. As for his name Pyrrhos, it means ‘fiery red’. Both names are most apt, because the hero Pyrrhos/Neoptolemos is traditionally pictured in the verbal and visual arts of the ancient Greeks as a veritable killing machine—whose fiery temperament in war replicates and thus renews the deadliest wartime moments of his father. In the case of Achilles, we find a horrific example of such a moment at Iliad 21.328–384, where the hero goes berserk as he proceeds to slaughter, one after the next, all the fleeing Trojan warriors whom he overtakes in his murderous progression of martial fury: the more blood he spills, the more furious he gets—until he becomes the embodiment of fire itself, since the poetry of the Iliad now merges this warrior’s rage with the cosmic power of Hephaistos as the god of raging fire. In the case of Pyrrhos/Neoptolemos, such horrific moments of martial fury are further augmented and multiplied: examples include the fiery hero’s slaughtering of Priam the old king, of Polyxena the beautiful princess, and of prince Astyanax, hapless child of Hector and Andromache. A moment ago, I described the hero Pyrrhos as ‘fiery’ in such contexts of martial fury. I will now elaborate, epitomizing from an earlier work (BA 122, 7§5; 330–332, 20§12). My description ‘fiery’ matches the hero’s name Púrrhos, deriving from the adjective purrhós, meaning ‘fiery red’, which in turn derives from the noun pûr ‘fire’. The description matches also the association of this hero with a kind of war dance known as the purrhíkhē—a word that likewise derives from the adjective purrhós. Here is a basic definition of the purrhíkhē as we find it in the ancient lexicographical tradition attributed to Hesychius (under the entry πυρριχίζειν): τήν ἐνόπλιον ὄρχησιν καὶ σύντονον πυρρίχην ἔλεγον ‘the word for energetic dancing in armor was purrhíkhē’. In the work that I am epitomizing, I offered detailed evidence to show that this kind of war dance was a ritual dramatization of biē ‘force, violence’ in warfare. I hold back on repeating the details here, except to add that the noun purrhíkhē is appropriate to the name Púrrhos, not only to the adjective purrhós, since there are myths that derive the name of the war dance from the name of the hero. According to the poetry of Archilochus (F 304W), for example, the word purrhíkhē refers to a war dance because Púrrhos danced such a war dance for joy after he killed the hero Eurypylos in the Trojan War. According to another tradition, mentioned by Lucian (On dance 9) and by other sources, Púrrhos not only “invented” the purrhíkhē: he also captured Troy through the ignition of this war dance, since he started the fire that burned down the city when he leapt out of the Wooden Horse, already dancing his dance and thus igniting the fire. As we have already seen, the hero Pyrrhos/Neoptolemos is traditionally pictured in the verbal and visual arts of the ancient Greeks as a veritable killing machine—whose fiery temperament in war replicates and thus renews the deadliest wartime moments of his father. And yet, before the Trojan War begins, Pyrrhos can be pictured as a most contemplative young man. He turns into a fiery killing machine only after he arms himself with the armor of Achilles. As we know from the plot summary of the Little Iliad, which is part of the so-called epic Cycle, this armor is handed over to Pyrrhos by Odysseus (p. 106 lines 29–30 ed. Allen 1912). For the cover illustration, I already showed a close-up from a vase painting by Douris, dated at around 490 BCE, which pictures a moment when Pyrrhos the hero reaches out to receive the helmet of his dead father, Achilles. The expression on the hero’s face is still composed and collected as he contemplates the helmet that he holds delicately in his hand. But the profile of the helmet that is facing him seems to have a face of its own, a dead face that is staring back at Pyrrhos, returning the young man’s gaze. The dead face, as I already suggested in the introduction, is radiating its own vision of death in war. Bibliography See the dynamic Bibliography for APRIP. Inventory of terms and names See the dynamic Inventory of terms and names for APRIP. Notes Cover image credit: Image via; shared there and distributed here in modified (cropped) form under a CC BY-NC-SA 2.0 license.