§0. The cover image of this post is a late 16th-century Mughal illustration of the Razmnameh ‘Book of Wars’, a Persian translation of the great Sanskrit epic Mahābhārata, depicting two opposed battalions led by the two heroes Arjuna and Bhishma (the warriors on the chariots) rushing into battle against each other.

A much later, but just as beautiful illustration of a similar scene, namely the clash between two armies led by the heroes Arjuna and Krishna (on the left) and Karna (on the right), can be found in the following image, an early 19th-century painting from Northern India, which, as Kevin McGrath kindly suggests to me, was probably carried around by itinerant poets who used it as a visual cue when they performed a song, pointing out with a stick the particular scenes which they were narrating. 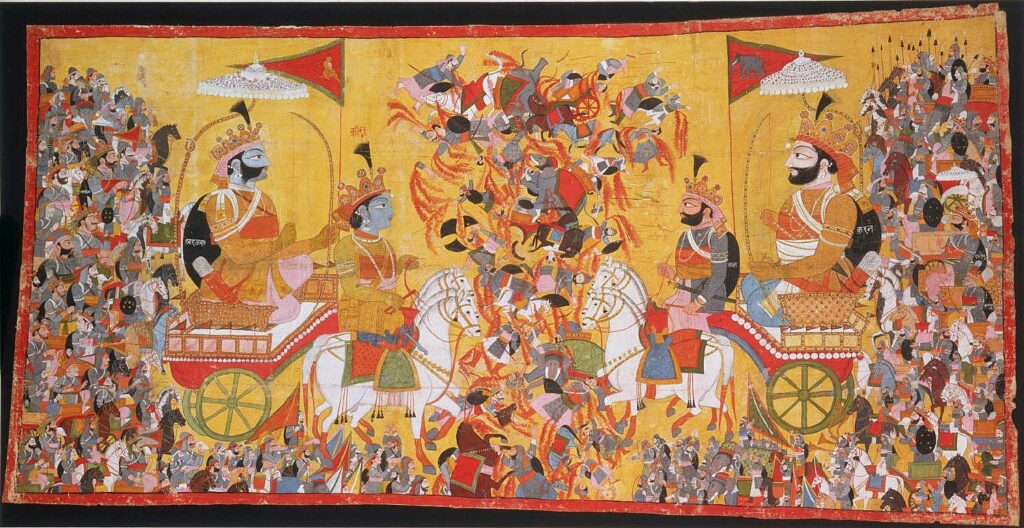 The battle of Kurukshetra of the Mahabharata epic. Image via Wikimedia Commons.

§1. The epic narrative which inspired both these illustrations, the Mahābhārata, is usually regarded to have been composed in the northern part of the Indian sub-continent between 400 BCE and 400 CE, and is probably the closest Indic counterpart to the Greek Iliad. This post deals with one of its poetic features and with the importance that it may have for the analysis of an Ancient Greek artefact, whose interpretation has been already discussed in a series of essays originally posted in Classical Inquiries 2020.07.31 and 2020.08.21, two written by Gregory Nagy and one by Gloria Ferrari Pinney. The artefact at issue is an Athenian red-figure stamnos attributed to the Triptolemos Painter (dated to ca. 500–450 BCE), whose decoration includes a cryptic depiction of (in Nagy’s description) “a dead ram, with his throat slit wide upon, who is being fought over by two contending warriors, to be identified as the heroes Hector and Ajax, fighting on opposing sides in the Trojan War as champions respectively of the Trojans and the Achaeans.” 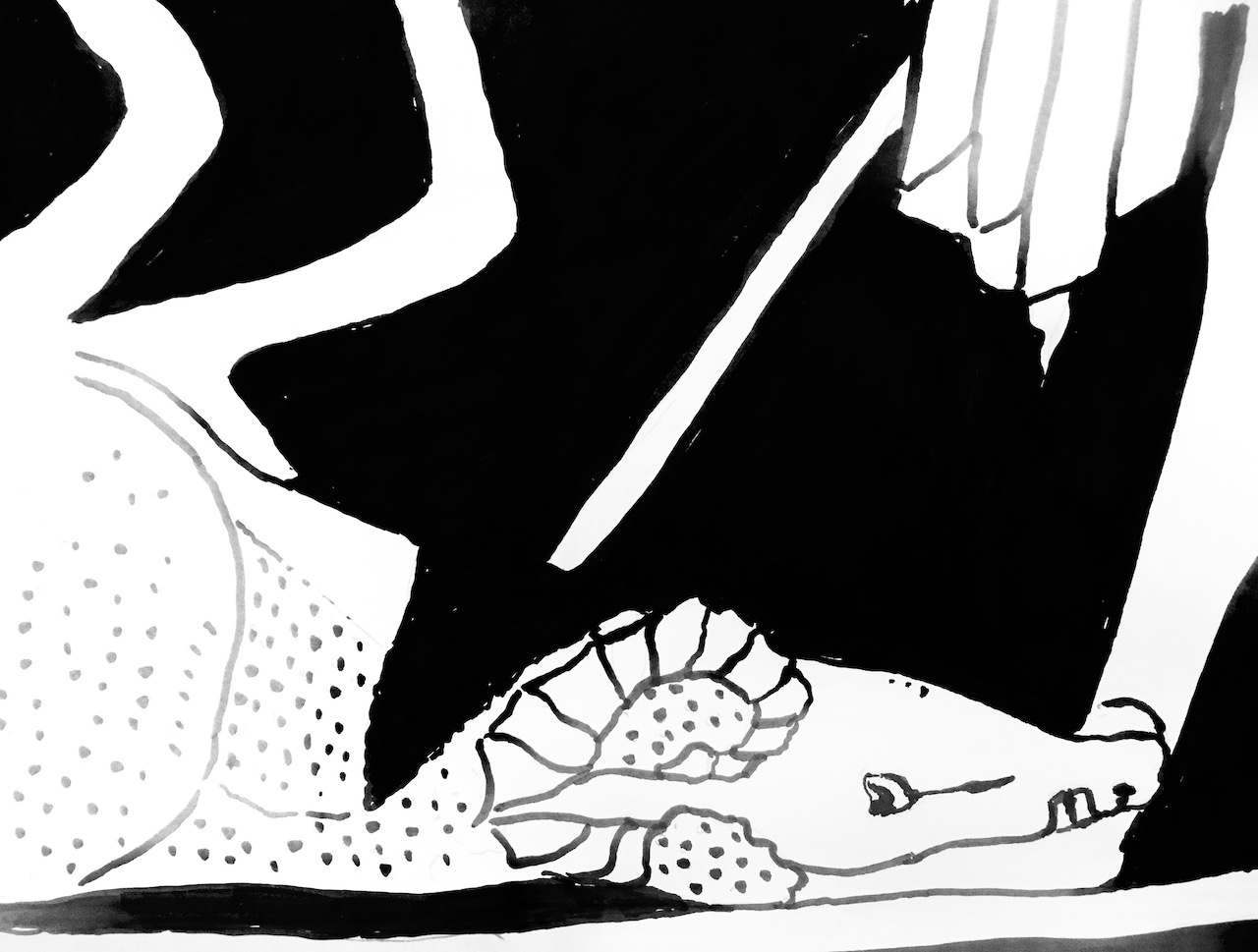 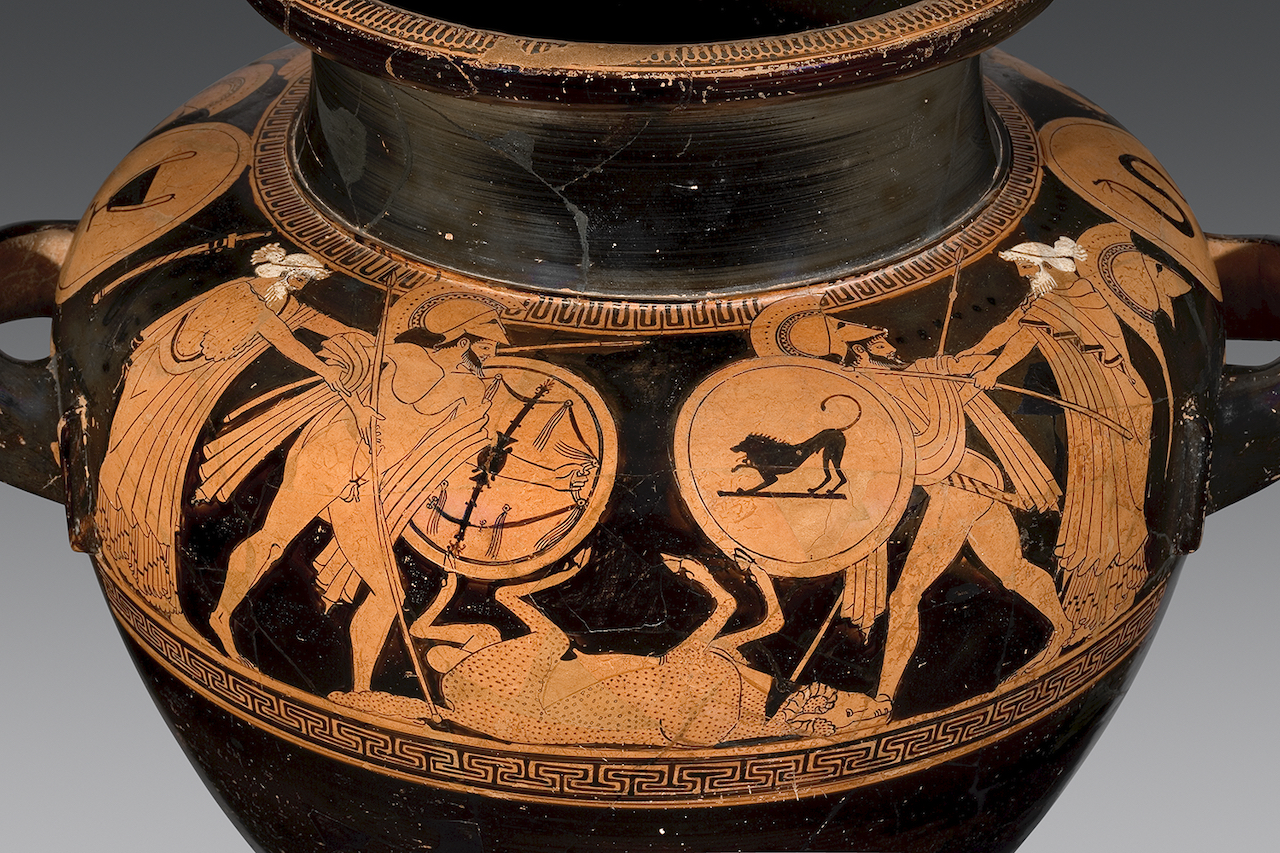 §2. As argued by Nagy, the painter’s labeling of the ram as ΠΑΤ[…], a fragmentary sequence which can very easily be read as the name of Patroklos, may allow for an interpretation of the sacrificed animal as some sort of representation of the corpse of the dead hero Patroklos. This is, of course, not the only possible interpretation, as pointed out (in her response to Nagy’s essay) by Ferrari Pinney, who, among other things, notes that “in my [i.e. Ferrari Pinney’s] experience, the imagery of the vases is not so straightforwardly poetic, in fact I [i.e. Ferrari Pinney] can think of no other instance.” For more details on this debate, the reader can refer to the previous posts; the aim of this brief essay is just to point out that the interpretation of the sacrificed ram as some sort of stand-in for the dead hero Patroklos may actually find a poetic parallel in a similar feature occurring in another Indo-European tradition: the conceptualization of the hero’s death in battle as a sacrifice, attested in the Mahābhārata.

§3. In chapter 7 of her 2004 book The Sanskrit epics’ representation of Vedic myths, Danielle Feller discusses a phenomenon which is highly relevant, namely the conceptualization of “the Mahābhārata War as a Sacrifice.” Taking as a starting point the repeated occurrences in this text of compound words like raṇa-sattra- (3.242.14) and raṇa–yajña– (5.57.12; 5.154.4), both meaning ‘battle- sacrifice’, Feller (2004:257-258) especially discusses two passages of the epic (5.57.12-14 and 5.139.29-51) in which quite extensive and explicit comparisons are drawn between the elements of war and those of sacrifice; among others:

–  the chariot is compared to the sacrificial ground;
–  the mace to the oblation-spoon;
–  the arrows to the darbha grass (a type of sacred grass used in rituals);
–  the soldiers’s heroism to the ghee (clarified butter) poured into the fire;
–  the shouts of the warriors to the recitations sung during the ritual;
–  the chopped off heads and the blood to the various oblations.

The last parallelism, comparing the body parts of slain warriors to the oblations offered to the gods, is already a very close match for the interpretation of the Greek stamnos’s sacrificed ram as a representation of the death of Patroklos.

§4. Even more interesting is, however, the exact correspondence with a further feature of the poem: “the term paśu– (sacrificial victim) is frequently applied to the slain warriors. […] The expression paśumāram amārayat (he made him die the death of a sacrificial animal) appears all through the war description”, as stated by Feller (2004:261), who mentions, for instance, the following relevant passages of the epic:

–  5.57.12: “I myself, father, as well as Karṇa, have taken religious initiation, after organizing the war-sacrifice and after making Yudhiṣṭhira our sacrificial victim, o bull of the Bharatas”
–  8.61.16: “Even today, after slaughtering him, I shall offer Duryodhana as another, second, victim of the sacrifice.”

In both these passages, the speakers (the warriors Duryodhana and Bhīma, respectively) are of course actually referring to the act of killing their (more-or-less) human enemies in battle (in fact, many characters are semidivine beings), but they choose to figuratively represent this situation as the ritual slaughter of a sacrificial animal: this matches the possible reading of the sacrificed ram depicted in the Triptolemos Painter’s stamnos as the representation of a slain Patroklos lying on the Trojan battlefield.

§5. In his essays, Nagy stresses the role which ritual practice and hero worship may have played in the creation of the “Patroklos-as-Ram” decoration; Feller, in her discussion of the corresponding feature of Sanskrit epic, also points to ritual practice as a likely source of inspiration. The same poetic and ritual complex has been more recently discussed by Kevin McGrath in chapter 2 of his 2017 book Rāja Yudhiṣṭhira as well, more precisely in section 2 “War As Royal Rite”, where he discusses “what is referred to as the śastrayajña (rite of weaponry) or battle, in which the death of warriors, the kṣatriyas, is ideally the offering that is to be made, and it is their bloodshed that causes a nadī, a ‘flood’, towards the domain of Yama, the deity of death, while their released spirits go towards the indraloka (the world of Indra).” Feller (2004:288-289) further connects this latter feature with the fact that “the warriors’ death on the battlefield is considered as a self-sacrifice (ātma-yajña).” These observations allow to briefly mention a couple of ritual and poetic correspondences in two other Indo- European religious traditions, those of Ancient Rome and Pre-Christian Medieval Scandinavia:

–  on the one hand, the belief that the offering of slain/sacrificed warriors reaches the Sanskrit death god Yama and that death in battle is a form of self-sacrifice has a parallel in the Roman ritual practice called devotio, by which a Roman general would sacrifice both himself and the enemy warriors to the gods of the Netherworld (Tellus ‘Earth’ and the Di Manes) in order to propitiate victory for the Republic (a practice particularly often associated with members of the family of the Decii Mures, see, for instance, Livy 8.9.4-8; for a recent overview of the topic, see, for instance, Ferri 2017);
–  on the other hand, the belief that the spirits of the slain/sacrificed warriors reach a sort of “heroic heaven” (the indra-loka- ‘world of Indra’, the warrior god par excellence) has parallels not only in the Ancient Greek myth of the “Isles of the Blessed”, but also in the Pre- Christian Scandinavian mythological belief by which, after a battle, the god Odin was allotted half of the slain, while the goddess Freyja would get the other half (in an even partition which is reminiscent of sacrifice as well); as in the Sanskrit epic, the spirits of the dead warriors would then go on to spend their afterlife in these gods’s heavenly abodes, called Valhǫll and Folkvangr, respectively (see, for instance, Grímnismál ‘Lay of Grímnir’ 14).

§6. In conclusion, I think that the interpretation of the Triptolemos Painter’s sacrificed ram, labelled as ΠΑΤ[…] and fought over by the two heroes Hector and Ajax, as a representation of the corpse of the slain Patroklos on the Trojan battlefield is supported by an exact parallel in the Sanskrit epic Mahābhārata, where quite explicit comparisons are drawn between battle and sacrifice and between slain warriors and sacrificed animals. This close correspondence suggests that both the stamnos’s decoration and the fact that “the death of the hero Patroklos in Iliad XVI parallels in striking detail the stylized description, documented elsewhere in Homeric poetry (Odyssey iii), of the slaughter of a sacrificial heifer” (Nagy 2013:0§12) may ultimately be rooted in unattested multiforms (i.e. alternative versions) of the Iliad in which the Greek poet(s), just like the Sanskrit poet(s) of the Mahābhārata, drew explicit parallels between the death of a hero and the sacrifice of an animal victim. Further parallels in mythological poetics and ritual practices attested in other Indo-European traditions (the Roman and the Scandinavian ones) seem to point to a very ancient origin for the “battle is sacrifice” and “slain warrior is sacrificed animal” equation.